As I sit here, eating store-bought pudding out of the tub and pondering my week, I feel eternally grateful that tomorrow is Friday. It is a day to celebrate. The end of a long, long week.

I am celebrating with pudding (Could I BE any more fun?!). My kids will celebrate with fun lunches.

I made present and ice cream cone shaped sandwiches (sunbutter and jam for Bigs and PB&J for Smalls) and threw a bunch of sprinkles on there, because…sprinkles. In my lunchbox. I used Food Writers to add details. I also packed Cheese-Its, red grapes (a few plums for Smalls), one cinnamon roll Oreo, and a Swedish fish each for dessert.

Have a great weekend,

Hello from the other siiiiide

It’s been a while. Halloween has come and gone. I’ve not kept up with both this blog and my “fun” lunches. I’ve had a time getting my migraines and headaches under control. Anyone who has been through that knows, well…it’s a headache! I’m taking it minute by minute, some days.

Here are two of the many lunches I’ve made since we last saw each other. These are the only fun(ish) ones. At least I *hope* they were fun for them. 😀 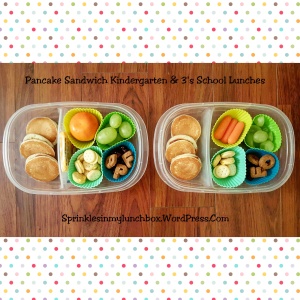 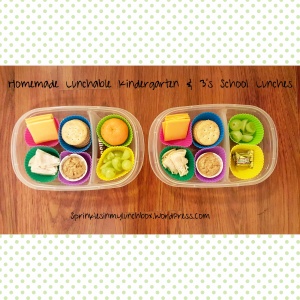 Another homemade Lunchable – I’ve been doing these about once a week now! This time it was chicken, cheddar, Ritz, a mini banana muffin, mandarin orange (Bigs), grapes, and a piece of Halloween candy.

Peace n’ Blessins’ (look it up, it’s my favorite), 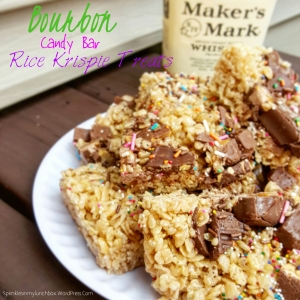 You guys. I made the yummiest dessert! My husband is a DJ and was having a DJ buddy come over on Friday night to throw down some tracks (lol), and I wanted to make a dessert for them. That was boozy. And cool. Because I need to stay relevant. Anywayzzz. I decided to do something with bourbon, because I am a bourbon/whiskey girl, through and through. I’m not even sure I should admit that. But, there you go. I also had to make something that was gluten free. So, I came up with bourbon rice krispie treats! It turns out, other boozy folk have had the same idea, according to the Internet (everything on the Internet is forrealz). But, mine is better. Because I added more butter. SALTED butter. And candy bars. And several different kinds of sprinkles. It was ridonk. Totally unnecessary. And cool. [all things that could be said about me, tbh]

These babies were chewy, crunchy, sprinkle-y, chocolatey, caramel-y (from the Rolos!!), and bourbon-y. 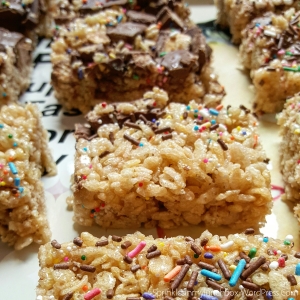 I used a traditional rice krispie treat recipe, but added a bit of flair.

The traditional recipe calls for a quarter cup of butter. I sort of added a half cup. #oopsie I also used salted butter, instead of unsalted butter. I love the flavor it added. It balanced out the marshmallows and candy bars. And, because I used twice as much butter, it was extra rich and gooey.

2 good glugs of bourbon (I used Maker’s Mark, Fireball would be delicious!)

Melt the butter in large sauce pan over low heat. Add the marshmallows and stir until melted and well-blended. Keep it on the burner for about two minutes longer, stirring constantly. Remove from heat, and stir in the vanilla and bourbon. Add the cereal and stir until well-coated. Pour into a buttered 9×13 pan. Sprinkle chopped candy bars and sprinkles, and press down with buttered hands. Let it cool completely (I placed mine in the fridge) before cutting into squares.

Today was the last day of turkey school lunches. Boo hoo. But Christmas is coming and that makes me just as excited as turkeys! And we decorated for Christmas. Yup. We went there. Before Thanksgiving (to be honest, we’ve done that every year since we’ve been together).

Here is what I packed my boys today: 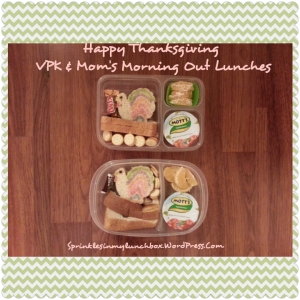 Do you call it “Muddy Buddy” or “Puppy Chow”? I grew up with both names for this dessert. I like them both. I can’t decide which one I want to call it, so for now, I call it “Muddy Puppy”. It seems to work out.

Do you need a quick last minute Halloween party recipe that is sure to please? You’ve come to the right place! This recipe can be made in under 20 minutes (add a few to that to the drying phase) and contains very simple ingredients. And it’s addicting. I’m not so sure that’s a good thing though.

*This can be made gluten and dairy free with the base ingredients (GF Chex, DF butter) – just make sure your candies are, as well

Put the Chex in a large bowl. Melt the chocolate chips, butter, and peanut butter (microwave for 1 minute, stir, microwave in 30 second increments to ensure it’s completely melted). At this point, you could add vanilla. Pour over your Chex and stir gently. Place in a Ziploc bag and pour in powdered sugar. Shake shake shake! Spread onto a large pan, covered in wax or parchment paper. Dry and cool. Add your candy.

**Caveat: I was in a rush and shook the powdered sugar and Chex WITH my candy. It all tastes the same, but your mix would be more vibrant if you followed the above instructions, which I failed to do. Which is typical.

Have a blessed Halloween!